Lithuanian PM to disclose his future on Tuesday, says 'nation can be calm' 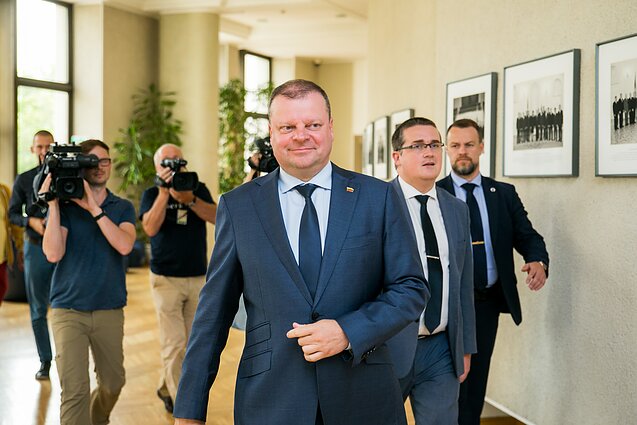 Lithuanian Prime Minister Saulius Skvernelis says he will provide the answer on Tuesday on whether he will stay in his position after President-elect Gitanas Nausėda's inauguration.

"I will provide you the same opportunity to have a conversation [with] the government on Tuesday," he told journalists in Seimas on Friday, after signing a coalition agreement together with the four parties.

He says he's already made the decision, but is not willing to overshadow the signing of the coalition agreement.

Skvernelis signed the part of the coalition agreement on the principles of formation of the new government. But the document does not contain his name, despite him being mentioned in the memorandum on the plans to form a new ruling majority, signed over a month ago.

The prime minister said the ruling coalition negotiations had impact on his decision on whether to stay in his position, adding that "the nation can be calm" over the future of the prime minister.

"The coalition agreement signed today means that we have a majority and there will be a stable government [...] and work will be done," Skvernelis said. "And personalities are a secondary thing."

The prime minister also said there are no irreplaceable people.

"Life goes on, and in any case a government is formed, the Seimas' leadership is formed, and work continues," the prime minister said.

Skvernelis earlier vowed to step down after July 12 if he lost the presidential elections. He came in third in the first round of voting.