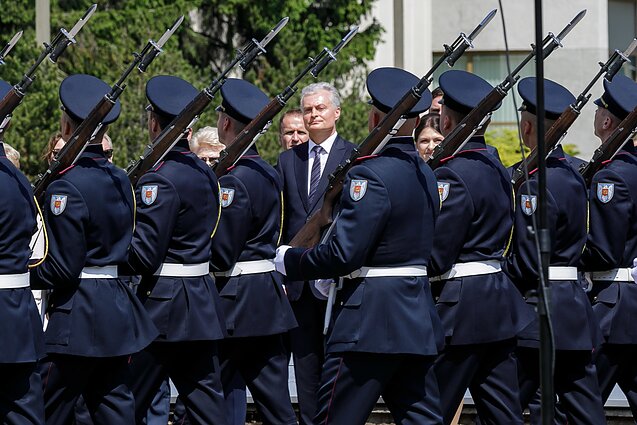 A military parade, a concert and a reception at the President Palace will be held next week during the inauguration of Lithuanian President-elect Gitanas Nausėda.

Representatives of the incoming state leader say the event on July 12 will be aimed at inviting people to be more actively involved in the state's governance.

"We invite every citizen, every resident and every creator of the state to celebrate the new stage in the state's development together," Alge Budrytė, chairwoman of the presidential inauguration commission, told journalists on Thursday.

According to Budrytė, in order to pay more attention to all residents, it was decided not to invite top foreign leaders to the July 12 events. She added that the inauguration should cost up to 60,000 euros.

On the morning of July 12, Nausėda will visit the monument to Jonas Basanavičius, who chaired the Lithuanian Council that signed the Independence Act in 1918, in central Vilnius.

"We invite people to come and hear the president's on why he is doing this," Budrytė said.

Later on, the presidential inauguration ceremony will take place during a solemn sitting of Seimas, followed by a military lineup in the Independence Square and a parade on Gediminas Avenue to the Cathedral Square.

It will be followed by a service at the cathedral, and afterwards a ceremony of honoring the flags of Lithuanian cities and towns and Lithuanians living abroad will be held in the square near the cathedral.

In the afternoon, the ceremony of handover of the Presidential Palace will take place in Simonas Daukantas Square where Nausėda will deliver a speech.

Later on, a concert will take place in Simonas Daukantas Square, and a reception will be held in the courtyard of the Presidential Palace.

Budrytė says the goal was to make inauguration events democratic and open. "We want that to be an invitation and encouragement for everyone to be more actively involved in the creation of the state's wellbeing," said Budrytė, who also the chief of Nausėda's election headquarters. "Lithuania belongs to all of us."

Nausėda is set to replace President Dalia Grybauskaitė who has led the country since 2009.