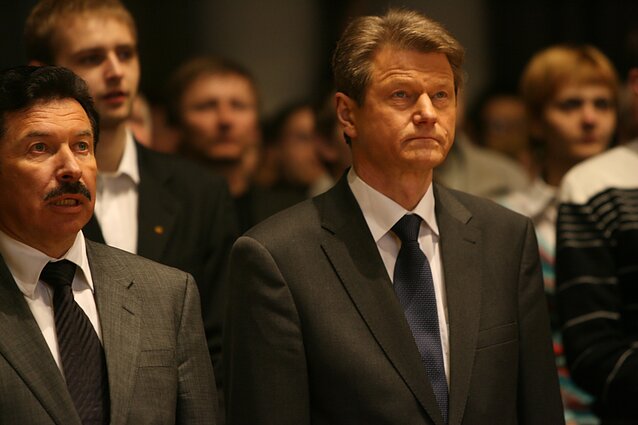 Rolandas Paksas, the former head of Lithuania's Order of Justice, was impeached in 2004 and removed from office after being elected president in 2003 / BNS

Lithuania's Order and Justice party plans to change its name in autumn, and its leadership is also considering the option of establishing a new political force.

"We'll have a new name […] We will call a congress in November and decide," the party's leader Remigijus Žemaitaitis told BNS on Tuesday.

In his words, the party is considering several possible new names, including the party's former name 'the Liberal Democrat Party', or the new 'Sovereign Nation' name.

Žemaitaitis also said the party is weighting the possibility to merge with other political forces or establish a completely new party. He says the goal is to "open the party's new page".

"The party's worldview has changed already […] we are becoming more open, have more discussions, and we are not that categorical as when there were attempts to tie the party to one person," Zemaitaitis said.

He took over the leadership of the party from its long-standing leader Rolandas Paksas who resigned after the 2016 Seimas election.

The party is now holding coalition talks with the Lithuanian Farmers and Greens Union, the Social Democratic Labor Party of Lithuania and the Electoral Action of Poles in Lithuania – Christian Families Alliance.