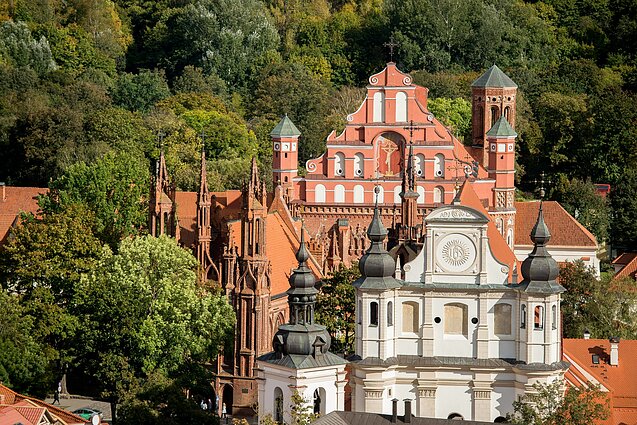 Speaker of the Lithuanian Seimas Viktoras Pranckietis and eight lawmakers on Sunday marked the 450th anniversary of the Union of Lublin.

On July 1, 1569, the Grand Duchy of Lithuania and the Poland established the Polish-Lithuanian Commonwealth, which covered the present-day areas of Belarus and Ukraine but collapsed in late XVIII century.

Travelling through central Lublin decorated with small flags and posters showing the anniversary date, lawmakers arrived in the city's cathedral for a service held by the archbishops of Vilnius and Lublin.

Calling the Union of Lublin the predecessor of the European Union, Vilnius Archbishop Gintaras Grušas not only called for recognition of its historic meaning and also called on politicians to learn from the mistakes.

"It was an important step aimed at strengthening defense and ensuring freedom from the external aggressor. Also, this treaty between two Catholic nations provided other good things but (…) we had to fight to ensure that we did not use force and violence to reach our goals," the Lithuanian archbishop said, addressing politicians, diplomats, culture and education figures from Lithuania, Poland and other countries.

The Union of Lublin helped the two countries protect themselves from Russia, but it partially restricted the Grand Duchy of Lithuania's sovereignty, thus, is seen as controversial in Lithuania.

A century ago, the decision to establish a common state with Poland was considered as the collapse of Lithuanian state.

Yet, since Lithuania regained independence from the Soviet Union, historians have been increasingly trying to show that the Union of Lublin did not strip Lithuania of its independence completely and was necessary to respond to Moscow's growing military threat.

The perceived threat from Moscow today is also encouraging Lithuania and Poland to grow closer today, and has become one of the key reasons for the improvement of bilateral relations, despite resurfacing disagreements over historic memory and Polish-speaking community in Lithuania.