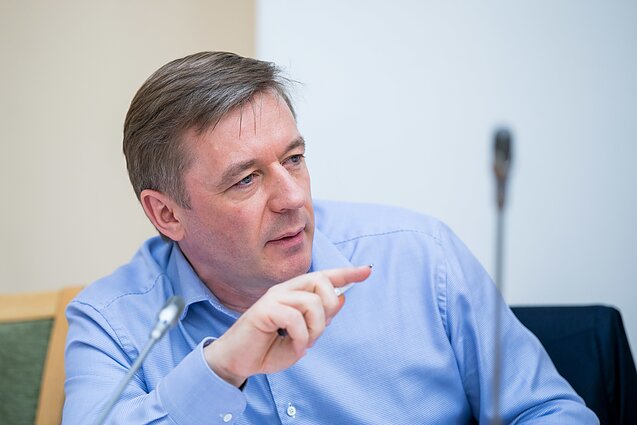 The agenda proposals of the Electoral Action of Poles in Lithuania (LLRA-KŠS) party, which recently joined coalition talks, are similar to the position of the ruling bloc, according to the Farmers and Greens Union (LVŽS) leader Ramūnas Karbauskis. The two parties' negotiators met on Tuesday to discuss LLRA-KŠS conditions for joining the government.

Karbauskis told journalists after the meeting that none of the LLRA-KŠS proposals were incompatible with the government's agenda, adding that the key issue was whether the government could fund them.

“Major parts of our programs are very similar, and nothing from what was proposed is either new or something we could not do. Some things relate to finances and their implementation depends on the means the state has. But I think we will agree on that,” Karbauskis said.

Rita Tamašunienė, the elder of the LLRA-KŠS political group in the Seimas, said that raising child benefits was the party's key proposal.

“We think they should be raised to €120 [a month] by 2021. We believe it's possible and other countries with similar economic capacity are doing it,” Tamašunienė told journalists.

Child benefits currently stand at €50 per month, but should go up to €100 with additional payments to large families households raising disabled children.

The LLRA-KŠS also proposes including into the government's plan free medication for elderly people.

A meeting involving negotiators from four parties is planned on Wednesday. It should also be attended by several ministers who will look into the financial implications of the parties' proposals.

Last week, the LLRA-KŠS said it was joining the ongoing coalition talks of the LVŽS, the Social Democratic Labour Party of Lithuania and the Order and Justice party. Such a four-party coalition would have a 77-seat majority in the Lithuanian parliament.