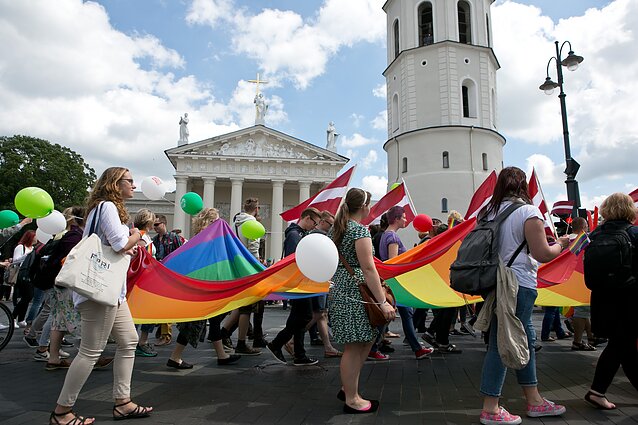 Organisers of the fourth Baltic Pride march in Vilnius expect it to be a big event, as businesses join to express support for the LGBT+ community. A counter-event is organised on the same day by a TV producer, but the police say they do not expect major disturbances.

Organisers and participants of Baltic Pride say that the Lithuanian society's attitudes towards the LGBT+ people have changed markedly since the first pride parade was held in Vilnius in 2009.

This year, Baltic Pride is joined by businesses. In addition to sponsoring Pride Week events, a dozen companies have signed the diversity charter, publicly expressing support for the pride.

“We've created a work environment that brings people together for a common effort. That is human rights, so there is space for everyone,” according to Mariano Andrade Gonzalez, the head of Barclays operation centre in Lithuania. “Barclays bank, the ambassador of the diversity charter, believes that a tolerant environment is necessary not only for business, economy, the country, but also the community.”

Ten big business brands have joined an initiative by the Žmonės magazine to express support for Baltic Pride by incorporating the rainbow flag into their ads.

Organisers of Baltic Pride, which is hosted by Vilnius for the fourth time, expect 10,000 participants in Saturday's parade. It will start in the Bernardine Gardens at 13:00 and proceed along Gedimino Avenue.

“Our main message is that we are all family,” says Vladimir Simonko, the head of the LGBT+ rights organisation LGL.

A counter-event is also planned on Saturday. Kristupas Krivickas, a well-known Lithuanian TV producer, is organising a ‘family parade’.

Krivickas says his event attracted considerable interest on social media and will be peaceful. His march will also start at the Bernardine Gardens and will express support for traditional family values.

“We start in almost the same spot. They will go one way, we will go another and no one is interfering with anyone else,” Krivickas says, adding that there will not be any “shouting, protesting or holding banners”.

The police say they are ready to respond to any attempts at provocation on Saturday.

Saulius Klebavičius, the chief of Vilnius Police, says he does not expect any big disturbances during the event and that uniformed and non-uniformed officers will patrol the location of the march.

“We are also monitoring social media to see if there are any calls to disturb public order,” Klebavičius says.