There is ‘Plan B’ in Lithuania's coalition negotiations, Kirkilas says 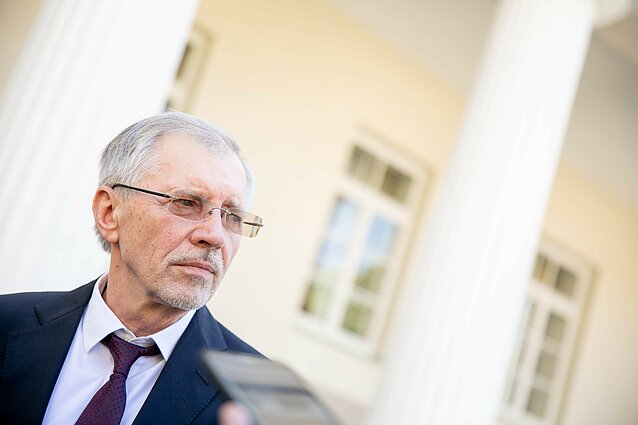 Gediminas Kirkilas, leader of the Social Democratic Labour Party of Lithuania (LSDDP), has said his party will get the Ministry of Social Security and Labour in the new coalition. However, it can still fall through if a fourth party refuses to join it.

Three parties, the Lithuanian Farmers and Greens Union (LVŽS), the Order and Justice party and the LSDDP, are negotiating terms of a new ruling coalition, but Kirkilas said it would not work, because the three do not hold a majority in parliament.

The three parties are still waiting for the Electoral Action of Poles in Lithuania – Christian Families Alliance (LLRA-KŠS) to join their future coalition. The latter has promised an answer on Friday.

“Unless they confirm, we don’t have a majority. And we started these negotiations to have a majority government, and not the existing one which, obviously, is very convenient for the opposition as they can (…) block laws. (…) Under such conditions, especially before the upcoming election, no ruling coalition can work,” Kirkilas told journalists after meeting with President-elect Gitanas Nausėda on Tuesday.

Nevertheless, Kirkilas said he hoped for a deal with the LLRA-KŠS, adding that he had a “Plan B”.

“We have a Plan B but it's too soon to speak about it, because it will undermine our negotiating conditions,” the LSDDP leader said.

If the fourth party agrees to join the new coalition, final agreements are expected next week.

There are “no guarantees we will reach an agreement”, Kirkilas noted. The LLRA-KŠS is offered a share of positions in the government and parliament according to its group size in the Seimas.

The LVŽS, the LSDDP and the Order and Justice party have 69 seats in Lithuania's 141-seat parliament. If the LLRA-KŠS joins in, the coalition will have 77 votes.

Under the existing coalition memorandum, Saulius Skvernelis would stay as prime minister, and the position of the Seimas speaker, now filled by LVŽS member Viktoras Pranckietis, would go to Kirkilas' LSDDP.

According to Kirkilas, Skvernelis in principle agrees with his party also taking the position of the minister of social security and labour. In all, the LSDDP wants three ministerial positions.