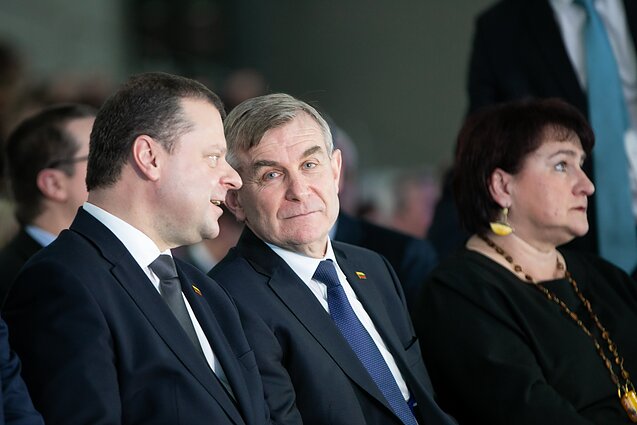 Lithuania will nominate its candidate to the European Commission after a new coalition is formed in the parliament, Seimas, and a deal of the next Cabinet is reached, the ruling party's leaders said on Thursday.

Prime Minister Saulius Skvernelis says there are potential candidates both among members of the current government and outside the Cabinet.

"The procedures start with the government holding discussions and making its decision. Such procedures have not taken place yet," the prime minister told reporters on Thursday.

"There are many candidates. There are several candidates in our government and not only in the government," he said

Skvernelis refused to say if he would consider taking up a job in the Commission.

"It's too early to speak about that today. We are speaking about other processes in the country today. Let's concentrate on these first," he said.

The head of government thinks the post in the EU's executive body should go to the largest political force in the Seimas.

"I don't think it should be directly linked to the Farmers (and Greens) party or its parliamentary group, but it would be natural for the largest political force, hopefully, in the next majority to delegate its representative," he said.

Under the law, the candidate is to be nominated by the government and approved by the president.

The term of the current European Commission ends next October. Talks are currently underway on the next Commission president.

Viktoras Pranckietis, the speaker of the Seimas, believes Skvernelis should stay on as prime minister.

According to the speaker, competence will be a key criterion in selecting Lithuania's candidate.

"It has to be a person who knowns things; it would be good if he or she is a known politician. For example, Latvia was represented by Valdis Dombrovskis, its former prime minister," he said.

Pranckietis mentioned Gediminas Kirkilas, vice-speaker of the Seimas and leader of the Lithuanian Social Democratic Labor Party (LSDDP), as a potential candidate.

"Perhaps Kirkilas would be a suitable person. He has served as prime minister and defense minister, and has been a member of the Seimas for years. His English is excellent, too," he told BNS.

Ramūnas Karbauskis, leader of the Lithuanian Farmers and Greens Union, said "my colleague Gediminas could be anything he wants to be, but whether he will be is an issue beyond his control".

"We are not discussing any candidates. The most important thing now is to form the next government and expand the coalition. Under the procedure, the government will nominate, the Seimas will vote whether or not to endorse, and the president is involved in the process, too," he said.