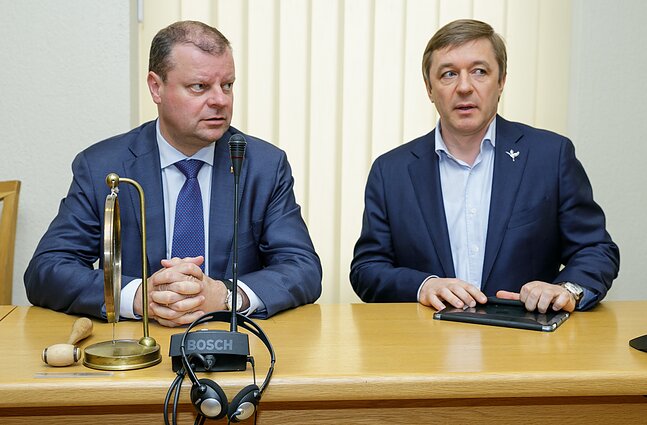 The Lithuanian Farmers and Greens Union has voted to stay in government, despite its leader's previous statements that it would quit due to Prime Minister Saulius Skvernelis' poor showing in the presidential election.

Seventy-three members of the party's council held the vote on Friday, alongside a vote of confidence in PM Skvernelis.

All but one voted in favour of staying in government, said the party's vice-chairman, Economy Minister Virginijus Sinkevičius.

Moreover, 69 members of the party's council supported PM Skvernelis, while three voted against the motion of confidence.

Skvernelis, who received 19.66 percent of the vote in last week's presidential election and did not qualify for the runoff, had himself asked for the party's vote of confidence. He also said he was not planning to continue as prime minister after the new president is sworn in.

The suggestion that the Farmers and Greens Union, currently the biggest party in the Lithuanian parliament, might leave the ruling coalition was first flaunted by its leader Ramūnas Karbauskis before the election. He had said that if Skvernelis did not qualify for the presidential runoff and the party performed poorly in the European Parliament elections on May 26, it would withdraw from the government.

However, both Karbauskis and Skvernelis moderated their positions this week. On Tuesday, the party's MPs voted to express confidence in the prime minister and decided to stay in the ruling coalition.

On Friday, the party's council was also to vote on a motion of confidence in Karbauskis, but decided to move the issue to its next meeting.