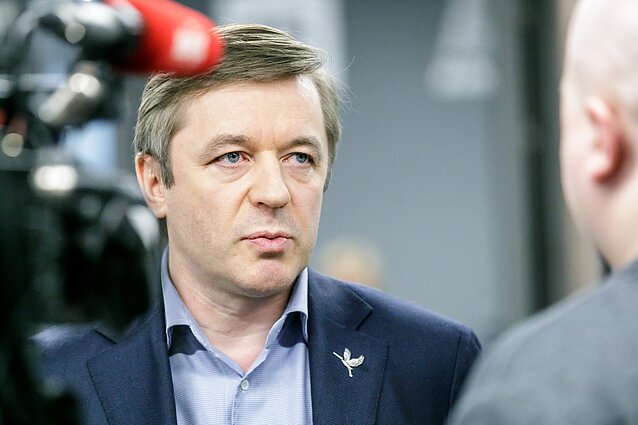 The leader of Lithuania's biggest ruling party has suggested that it may quit the government if it loses this month's presidential and European Parliament elections.

The board of the Lithuanian Farmers and Greens Union (LŽVS) discussed the possibility on Monday, though its leader, Ramūnas Karbauskis, had spoken about the possibility last week.

“If the Lithuanian society show they have no confidence in us in both of the upcoming elections, then we do not see how we can stay in the ruling bloc. In that case, we will withdraw from the ruling majority,” Karbauskis told reporters after the party's board meeting Monday night.

The positions stated at the meeting was discussed by the party's group in the parliament, Seimas, on Tuesday. The majority of the group's members voted in favor of the proposal and only two members abstained, Karbauskis said, adding that several members were not present at the vote.

“We are not going to leave politics or abandon our vision, but national elections are a good opportunity to ask society if we have their confidence in us to go ahead with our programme. If they express that confidence, we will continue our work,” he said.

Under the law, the government will have to return its powers to a newly elected president. It is usually a symbolic gesture, but in case of a defeat in both elections, the LVŽS “will not participate in the formation of a new ruling coalition,” Karbauskis said.

If the party loses one of the elections, it will make a separate decision on whether to stay in power, he added.

The party's leader said last week that his party would quit power if it lost the presidential and European Parliament elections.

“If the conservatives have their president, that is, either [Ingrida] Šimonytė or [Gitanas] Nausėda – we believe both of them are the conservatives' candidates – and we as a party fail to win the European Parliament elections, I may suggest that the LVŽS withdraw from the ruling coalition,” he told BNS last Thursday.

The ruling coalition consists of the LVŽS and its minor partner, the Lithuanian Social Democratic Labour Party (LSDDP). They have a cooperation agreement with the Order and Justice political group in Seimas. This gives them 69 seats in the 141-strong parliament.

The bloc's initiatives in the Seimas are also often backed by the Electoral Action of Poles in Lithuania–Christian Families Alliance, which means they can muster a total of 77 votes.

Recent polls showed Skvernelis trailing Gitanas Nausėda, an economist standing as an independent in the election, and MP Ingrida Šimonytė, the conservatives' candidate.