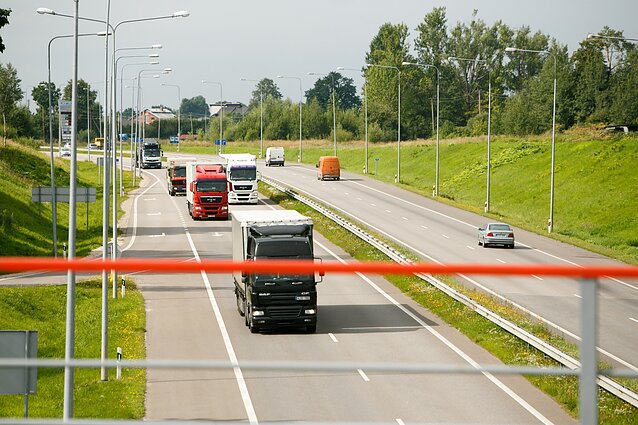 The European Union's Mobility Package has sparked a debate about truck drivers' pay in Lithuania. While trade unions demand immediate pay rises, carrier companies and some politicians insist that the EU's proposed regulations are a more immediate concern and threaten the very survival of their businesses.

There are some 73,000 truck drivers in Lithuania and, officially, most of them make just above the minimum wage. Labour unions explain that the rest of their pay comes in the form of per diem allowances, which are not taxed.

This also means that the drivers are not entitled to full social security benefits. The unions therefore demand to renegotiate how truck drivers are to be remunerated.

Meanwhile carrier companies say that the drivers' very jobs are at stake, since the EU's new Mobility Package, which is making its way in the European Parliament, threatens the entire sector.

The argument has support in the government. Ričardas Degutis, Lithuania's vice-minister of transport, says that the sector cannot afford to fight over pay rises and must present a united front against the Mobility Package which, he says, could drive trucking businesses out of the country.

“The risk is that businesses can start moving out of Lithuania. And then we would have nothing to talk about and no one to talk with,” Degutis says. “Let's first make sure that we have the jobs and then we can take care of welfare issues.”

Union representatives disagree. Audrius Cuzanauskas, the head of the Alliance of Trade Unions, says that employers are free to manipulate: they can send their drivers on unlimited long-haul trips abroad, extend them without prior notice and force drivers into unpaid leave.

“What are we talking about? It's modern slavery,” Cuzanauskas insists.

Moreover, with their pay slips showing just the minimum wage, the drivers will be denied adequate pensions when they retire, will not be entitled to sick leave pay and banks are refusing their mortgage applications.

But their employers insist that they cannot make promises about higher pay before there is clarity about the costs of the Mobility Package.

The Ministry of Social Security and Labour has suggested a compromise: to allow per diem payments only to drivers' whose official monthly salary is over €1,100, or double the minimum wage.

Tomas Garuolis, the secretary for transport policy of the road carriers' association Linava, says that such random regulatory decisions can do serious harm to the sector.

“Someone puts this random offer on the table, two [minimum wages], and we are talking about it,” he says. “Serious companies need to estimate the costs, effect on their profits, if they can survive. Each decision must be backed by analysis. We haven't seen any arguments behind this one. Now they say two, but what if someone else suggests three? Companies will go under.”

The trucking sector is estimated to account for 6 percent of Lithuania's GDP.