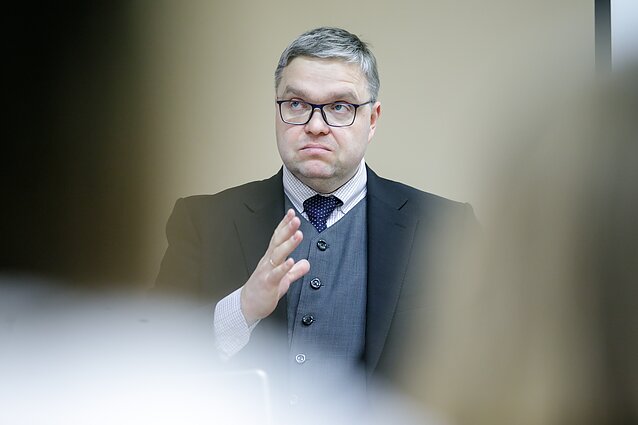 The Bank of Lithuania will cooperate with law-enforcement bodies, but sticks to its position that banking regulation authorities were not to blame for the 2009 financial crisis, the central bank governor said on Monday after the government decided to ask prosecutors to investigate alleged manipulation of interbank rates.

“The Bank of Lithuania's position remains unchanged: in our opinion, changes in Vilibor [Vilnius Interbank Offered Rate] were due to economic reasons. Because of higher interest rates at that time, borrowers paid more for their loans and depositors earned higher interest on their deposits,” he added.

The financial supervision authorities that functioned during the crisis period have since been merged into the Bank of Lithuania.

The government's decision to turn to the Prosecutor General's Office over the authorities' performance comes after MP Stasys Jakeliūnas, chairman of the Seimas Committee on Budget and Finance, informed the Cabinet last Wednesday about the course of the ongoing parliamentary investigation into the circumstances that led to the 2009-2010 economic crisis.

The lawmaker, who chairs an ad-hoc commission that is carrying out the probe, said last week he had doubts whether the central bank properly supervised commercial banks that, he said, might have manipulated Vilnius interbank offered rates (Vilibor), the benchmark for lending in the litas.

He said borrowers might have overpaid up to €500 million in interest over the course of ten years.

Mantas Zalatorius, head of the Association of Lithuanian Banks, has said the government's move is “strange”, because it is the legislative branch, not the executive, that oversees the central bank's control.

The government's decision to ask the Prosecutor General's Office to evaluate the then financial watchdogs' actions during the financial crisis is "strange" as the parliament, not the government, is in charge of the central Bank of Lithuania's parliamentary control, says Mantas Zalatorius, head of the Association of Lithuanian Banks.

“As far as I know, the parliament is in charge of the Bank of Lithuania's parliamentary control. I have always said that Mr. Jakeliūnas, who started this whole thing, should have turned to law enforcement himself, especially if he has any additional information. I find it strange that it was not the Seimas which did it. What does the government have to do with this?” Zalatorius told BNS Lithuania.

He added that two institutions, the Bank of Lithuanian and the Competition Council, had already investigated possible attempts to manipulate the Vilibor rate and both found no evidence to that effect.

“The Competition Council carried out a preliminary investigation in 2013 and it showed there were no grounds to believe such an agreement existed. So they didn’t even launch a full investigation. The Bank of Lithuania said the same thing. So now they want someone else to repeat that?” Zalatorius asked.