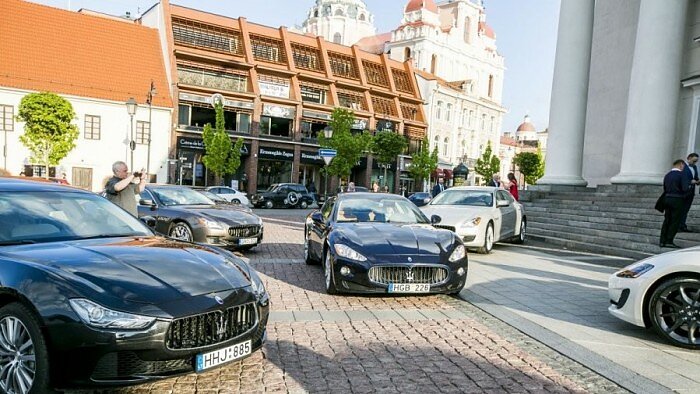 Lithuania has received recommendations from the European Commission on the most pressing issues in the economy that need addressing. Disturbingly, over 30 percent of people in Lithuania face poverty risk, labour taxes are punishing, while levies on wealth - less detrimental to economic growth - are all but non-existent. Experts say the first steps would be introducing tax on real estate and cars.

Lithuania has received recommendations from the European Commission on the most pressing issues in the economy that need addressing. Disturbingly, over 30 percent of people in Lithuania face poverty risk, labour taxes are punishing, while levies on wealth - less detrimental to economic growth - are all but non-existent. Experts say the first steps would be introducing tax on real estate and cars.

This year, the European Commission presented relatively few recommendations in order to point out issues that are truly pressing. The EC made three points about Lithuania's economy and growth prospects.

"Lithuania’s tax revenue is largely dependent on indirect and labour taxation, while the revenue from environmental and wealth taxation remains very low. Lithuania continues to face challenges in the area of tax compliance, in particular in relation to VAT," the Commission says in its country-specific recommendations.

Moreover, due to demographic trends, migration and poor healthcare results, Lithuania is losing its working-age population, while retirement scheme reforms are insufficient.

"Over 30 percent of Lithuania’s population is at risk of poverty. The reform of cash social assistance, combined with the effect of an improved economic situation, led to a considerable fall in expenditure and in the number of recipients of social assistance. Active labour market measures and other services for supporting beneficiaries are still, however, limited," the document states.

With these problems in mind, the EC recommendations for Lithuania in 2015-2016 are, first, stick to sound public finances, broaden the tax base and improve tax collection.

Second, Lithuania should address the issue of shrinking working-age population by better attuning its education system to market needs, by improving its healthcare system and by reducing the tax burden on low earners and shifting it to other sources.

Third, Lithuania needs a comprehensive reform of its pension system and to ensure that people looking for work are able to find it.

Poverty and work until 75

Nerijus Mačiulis, economist at Swedbank, says that the EC's recommendations are hardly surprising and point to chronic maladies of Lithuania's economy.

"As the population ages, there are more retired people and it will be difficult not to see these problems. Not only the EC, but also the International Monetary Fund speaks about them as well as the current government which adopted its programme back in 2012. The programme included a plan to ease taxation on labour, fight social exclusion and levy taxes wealth. It is obvious that none of it is being done," Mačiulis says.

According to the economist, little has been done to improve the lot of low earners, except small increases to the non-taxable minimum - the annual amount that is deducted when calculating income tax.

"Obviously, the non-taxable minimum should be raised not by several dozen euros, as the government did one and a half years ago, but there should be ways to double it, so that the lowest earners do not get their income taxed at all.

"But the revenue that the state budget loses needs to be compensated from property taxes: either by extending the real estate tax or introducing a car tax. There are no other ways, something that has been repeatedly stated by the EC, the IMF and the prime minister's own task group that presented suggestions on how to reform our taxation system," Mačiulis said.

There needs to be more reform in the pension system, he adds. If working population shrinks, all the contributions they pay into the public retirement scheme cannot be spent on payments to today's pensioners.

"Under such circumstances, the only way out is to let people invest more money into second-tier pension funds. Otherwise, we will have to postpone retirement age to 75 or rely on mass immigration of labour force, which would also be a challenge," Mačiulis believes.

While the problems that plague Lithuania's economic prospects are well-known to everyone, it is quite unlikely that anything substantial will be done about them before 2017, he adds. 2016 will be an election year and politicians will be reluctant to risk their popularity. On the other hand, Mačiulis says, there might be less resistance to new taxes on real estate and cars if they came together with tax cuts on labour.

"If we introduced universal tax on cars, the tax burden for average and low earners would not grow or might even decrease. After paying taxes on their cars, people will pay less income tax; and those without a car will see their tax burden ease. It would be a very social democratic solution, introduce more progressivity into our tax system, expand the tax base - which is what international institutions recommend that we do," according to Mačiulis.

The curse of black economy

The Lithuanian government could simply collect more revenue on existing levies, if it were not for the persistence of the black market economy. Stockholm School of Economics in Riga has released estimates, suggesting that the black market accounted for 15.3 percent of Lithuania's GDP in 2013.

"The main reason why black economy exists is not high taxes, but rather the fact that people do not believe that the taxes they pay will be used efficiently and transparently. To be willing to pay their taxes, they need to trust their government, there's a direct link. Look at Scandinavia or Switzerland - people willingly pay taxes there because they know they will benefit from them," he says.

Having joined the eurozone this year, Lithuania will have to contribute to implementing the EC's recommendations for the bloc.

The recommendations will be discussed by EU ministers in June, after which national leaders will have to endorse them.

The document is expected to be adopted in July. Member states will then have to incorporate them into national policy and fiscal plans.

The EC's recommendations for the eurozone countries include structural reforms aimed at easing external and domestic debt and encouraging investment. By spring 2016, eurozone countries are urged to make decisions on lowering taxes on labour, reforming their service markets and making their public spending more efficient.

The EC's estimates, announced in May, see Lithuania's GDP growing 2.8 percent this year and 3.3 percent in 2016.