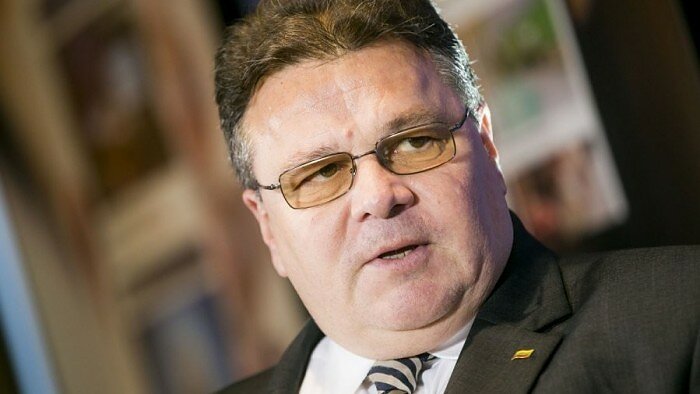 Accepting refugees is not the only way to contribute to the resolution of the existing refugee crisis, and the allocated quotas are still an issue "on paper", Lithuanian Minister of Foreign Affairs Linas Linkevičius says.

Accepting refugees is not the only way to contribute to the resolution of the existing refugee crisis, and the allocated quotas are still an issue "on paper", Lithuanian Minister of Foreign Affairs Linas Linkevičius says.

In his words, the European Commission's recent proposal for Lithuania to accept 207 refugees, as part of the part of the resolution of the migrant crisis in the Mediterranean Sea, should be treated as a proposal that needs to be discussed.

Moreover, he pointed out, refugees want to get into richer countries, therefore, the question remains as to whether Lithuania would eventually be able to implement the quota.

"I see it as a proposal, nothing more than a proposal we need to discuss. Our position is that we can and should express solidarity and share the burden but that should not be made mandatory. We will be having discussions on the issue," Linkevičius told BNS in the Turkish resort of Antalya where he is attending a meeting of NATO foreign ministers.

The Lithuanian foreign minister underlined that Lithuania is already contributing to the resolution of the migrant crisis by sending a rescue helicopter and also other ways.

"I would like to stress that accepting refugees is not the only way to contribute to the resolution of this crisis as there are other ways, and we have said that many times. Sending a rescue helicopter with a crew is really not a small contribution which practically has major significance. And mandatory quotas are also hardly implemented. As far as we know from our experience, these people want to get into richer countries which can offer more social guarantees, and those quotas are very much an issue on paper. It makes us think whether we’ll be able to resolve something," Linkevičius said.

Meanwhile Interior Minister Saulius Skvernelis says that Lithuania will accept as many refugees as the European leaders will decide.

The interior minister noted that a certain number of people, 10-20, could be accepted voluntarily, whereas the leaders of the EU will make the final decision.

"We will implement the decision taken by the EU leadership," Skvernelis told journalists on Wednesday.

He said the question should be addressed to President Dalia Grybauskaitė, who will participate at the European Council.

According to the interior minister, the number of refugees to be admitted "is neither in the thousands nor in the hundreds".

On Wednesday, the European Commission revealed its proposal of moving 207 refugees to Lithuania as part of the resolution of the migrant crisis in the Mediterranean Sea.

Lithuania would be expected to accept such a number of refugees under a so-called resettlement scheme stipulating that 20,000 resettlement places would be distributed for people from third countries who need international protection in Europe.

Latvia would be expected to accept 220 displaced persons, Estonia – 326 and Poland – 962. The largest quota of 3,086 people is allocated to Germany. The priority regions for resettlement will include North Africa and the Middle East.

EU member states have so far accepted refugees voluntarily and their applications have been examine in the countries they have come to.

Brussels suggests creating in the future a "relocation mechanism" under which Lithuania would have to process 1.16 percent of asylum applications received in Europe.

The quotas have been allocated taking into account a country's population, economic state, the level of unemployment and the number of previously-accepted refugees.

The Commission proposal is aimed at reducing the existing burden for southern European countries in dealing with refugees coming from Africa.

Tensions are also rising because of the fact that the UK, Ireland and Denmark can opt out of the scheme under prior agreements.

EU leader are set to discuss the Brussels proposal in June.