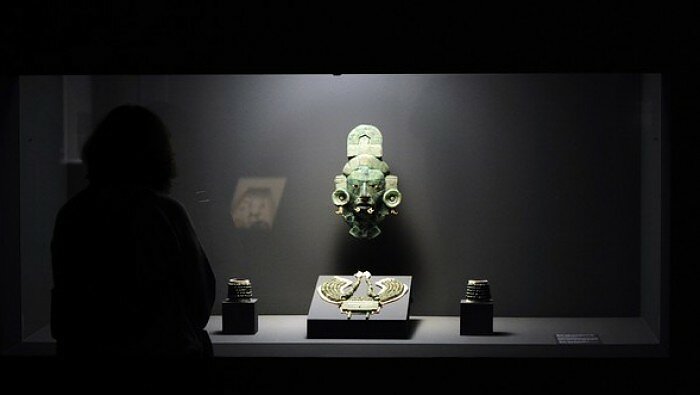 An archaeological museum is opened in Kernave, Lithuania. This museum exhibits only those objects that have been excavated in the historic village Kernave.

Excavations in the Kernave cultural reservation were started in 1979. However, until now only 2 per cent of the territory has been explored. But archaeologists claim that they have found enough historical objects for the entire museum.

Kernave is a very old historical site. First inhabitants came here at the 11 000 BC. They were mostly deer hunters. Kernave settlement existed until 1390 when it was burned to the grounds. The town was mentioned as the first medieval capital of Grand Duchy of Lithuania in 1279.

In later years, the remains of city were covered with an alluvial earth layer, that formed wet peat. It preserved most of the relics intact, and it is a treasure trove for archaeologists, leading some to call Kernave the Troy of Lithuania.

The history of Kernave is presented at the museum by showing the excavations, archaeological tools, video material, burial customs. Historians have restored how the settlement looked at the different times. The display can be found in exhibition halls and there it is also related to the most important events at the time that occurred in another parts of the world. Visitors can even take part in the hunting or medieval battles games. They can also experience various old crafts.

In 2004 Kernave Archaeological Site was included into UNESCO world heritage list. Since then excavations have been limited in order to prevent possible damage to the site. However, archaeologists still explore the surface with special technology.

The museum will be opened this Friday.

1. Soundbite (Lithuanian), director of Kernave cultural reservation, Saulius Vadisius, saying: This is a world heritage site. Such prehistoric sites as this are only 71 in the world. Among them Stonehenge, drawings in caves and Kernave as well.

2. Soundbite (Lithuanian), director of Kernave cultural reservation, Saulius Vadisius, saying: Since we work on experimental archaeology for many years and days of live archaeology are well known to the people, so we used the concept in this exposure as well. So that people could know about the object that is displayed here, how it was used, how it was made.